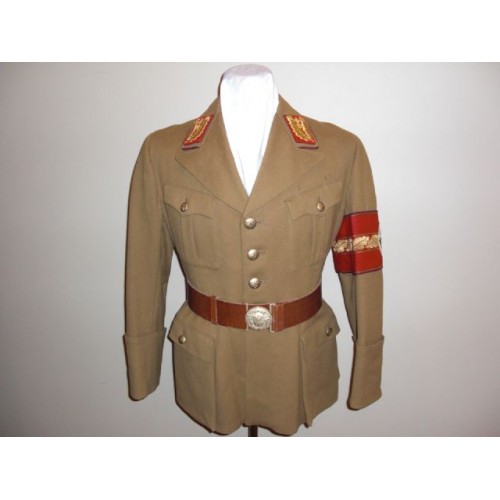 Featured here is a tunic for a full Gauleiter in the popular post-1939 style. Collectors covet this style particularly for the attractive collar tabs and ornamental armbands that are exclusive to this generation. The highlights of this tunic are the hand- embroidered collar tabs. Unquestionably correct in every way and of the absolute highest craftsmanship, they must be seen under magnification to truly grasp just how detailed and precise they really are. The armband also represents the highest position in the Gau, with the attractive gold leafing of the Gauleiter, and the correct wine-red piping along the upper and lower edges. Another beautiful touch is the private makers label featured on the inside. So many of the tunics that surface are lacking these, and it makes for a really unique bonus that adds a little more character and personality to an already choice example.

Gau level tunics of any rank are seldom encountered, so this is a special opportunity to inquire about one of the most desirable tunics available in the Political Leader ranks. A full Gauleiter tunic in the post 1939 style that has everything: rarity, allure, significance, and condition.

Of note: During the time of the National Socialists, there were as few as 33 Gau and as many as 43. This is an important consideration when evaluating the rarity, and unlikelihood, of such an example to still exist in 2008.