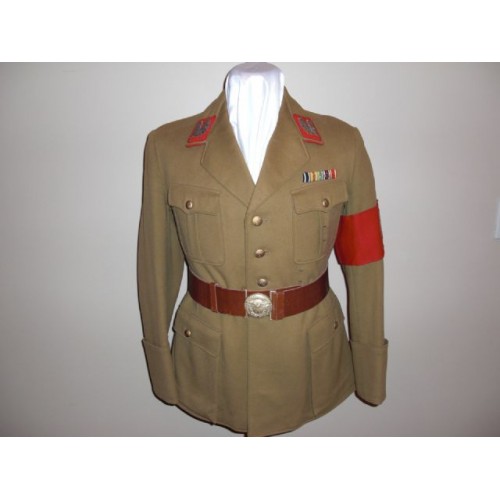 This uniform set, to include the tunic and pants, are believed to
have been the personal uniform of Gauleiter Wagner. This has been
deduced based on the following clues:  proportions are consistent
with Wagners dimensions, the ribbon bar included is consistent with
the medals Wagner was awarded in the first World War, the loops on
the left breast pocket match the way he wore his medals in period
photos, the private maker label on the inside of the tunic is the
label of a tailor from a town in his Gau (Heidelberg), and finally,
Wagner was the only Gauleiter of Gau Baden during the entire
existence of the Third Reich.

While these suggestions leave no doubt in the mind of the proprietor
as to who the original owner of the uniform was, the lack of
'conclusive' evidence, such as a name tag in the pocket, means the
group is being offered with no premium added for the attributable
element. The set is being marketed as a complete, untouched,
pre-1939, single-breasted Gauleiter tunic with hand-embroidered
collar tabs, which itself is a rare and highly sought after find.
The tunic is complete and undamaged, and the pants have survived the
decades remarkably intact.  An exciting, original 'unnamed' -
'personality' piece!